This week has been about getting my ducks in a row in preparation to start chemo next week. On Monday, I had a PET scan and an MRI of my brain. For those of you who don’t know, a PET scan uses a radioactive glucose (delivered intravenously) to see where the cancer is in my body. The cancer cells take up the glucose, and in the scan, they end up glowing. It’s kind of cool. Once the juice was injected, I got to wait for about 45 minutes to let it circulate through my body. Then, into the machine (just like a CT) I went. The scan took about half an hour, and they told me to bring a CD if I wanted. So, I burned a copy of select songs from the Begin Again soundtrack and chilled out while they took both regular CT and PET images of me. 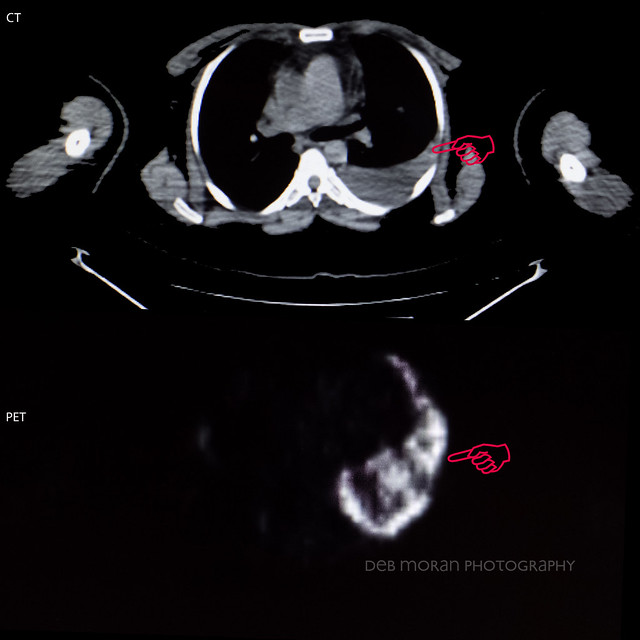 The MRI was less fun. There’s construction going on at the hospital where I had it done (Highland Park), so I was taken to a temporary trailer MRI machine. Kinda creepy at 8pm (when they could get me in). And, of course, annoying because that machine makes a heck of a racket while it does its thing.

The PET scan lit up as expected, in my parotids and lungs. But, it turns out my left adrenal gland has some lymphoma as well. That changes things just a bit, in that during my last three cycles of chemo, I’ll get some extra chemo in my spine to prevent the cancer from spreading to my brain. Dr. Gimelfarb will take me into interventional radiology, and inject it using fluroscopy to guide her. It’s not a long infusion – just a shot. Supposedly akin to getting an epidural or spinal (which I had when Meredith was born via c-section). At one point, that would have freaked me out, but now, with all I’ve had done to me, it really doesn’t seem so scary. I’mÂ not quite sure what it means in terms of chemo side effects. I’ll be talking with the doctor more about that as it gets closer. I think I have enough on my plate right now.

Now, for some good news! The MRI shows that my brain is all clear (I hesitate to say normal, because, well… it is me, after all), and there is no lymphoma in my bone marrow either.

Tomorrow, I get my port-a-cath, so stay tuned for an update after that.

One thing I’d like to accomplish with this blog is answer all those questions that people have but feel too nosy/awkward/silly asking about. Cancer can be a big, scary, confusing subject, but it doesn’t always have to be. So, if there’s something you’re wondering about that I haven’t hit on, please, feel free to ask me in the comments and I’ll address it to the best of my ability in a future post. Remember, no question is stupid if you don’t know the answer.

Thanks for the update. Continued prayers and positive thoughts sent out for you and your doctors.
â€”Susie Westervelt, April 9, 2015

Support & jokes are so helpful!! I was so glad however at the end, when I didn’t hear about my braveness & courage. I had no choice! I just wanted to be normal, so that’s what I wish for you— I want you to be normal. (Ok u can now make a joke about never REALLY being normal!)
â€”Brenda Moskovic, April 8, 2015

Deb, you are awesome and I’m glad you are open to questions. I’m in awe of your positive attitude! Keep it up and prayers are coming your way!
â€”Amanda Lehmann, April 8, 2015

Lots of positive vibes coming your way, Deb. I cannot imagine what you’re going through, but can offer my thoughts and prayers as you bravely face this journey. â€”Jenny Murtz, April 8, 2015

You are “setting the stage”, for this crazy adventure—BUT–Your Quirky sense of Humor will carry you through! I am soooo proud of you!!
â€”Jo Wilken, April 8, 2015

Well gosh…this thing doesn’t know who it’s messin with. Thank goodness it is staying away from the marrow and brain.
â€”Laura Roberts, April 8, 2015

Deb, what a great update! You are making a scary disease much less frightening for so many, however, you still have a lot ahead of you, therefore, you remain in my thoughts and prayers! Now, what can an old lady in Kentucky do for you? All you have to do is ask!!
â€”Kay Matton, April 8, 2015

Deb, I owe you your laugh of the day. Will send via email so as not to offend any of your CB followers – you know now crass we Fink women can be (yes, I am an authentic Fink woman via your Great Auntie Ruth Fink Baker!) When Ruthie kept falling down the doc ordered a scan of her brain….you reminded me of that – and when she got the results she called to say “They got the results of by brain scan. They found nothing.” Well, her daughters knew for years there was nothing in that head……..
â€”Margo Barbakow, April 8, 2015

Deb, you are just awesome! Your openness and honesty are true gifts. Thank you to you and your family as well for inviting us to be a part of this journey.
â€”Kris Baker, April 8, 2015

No questions – just positive thoughts and wishes for you.
â€”Mary Schumann, April 8, 2015

Deb, you’re amazing! You’re unbelievable strength and courage will more than get you through this! Not to mention all your family and friend support! Thanks for keeping us updated 🙂
â€”Vanessa Schenk, April 8, 2015