Since my hair will be gone in a few weeks, I decided to chop it short on Wednesday. I figured it’d make the transition easier for me and especially for Mere, who is still worried she’s going to be scared of me when I’m bald. So, It’s pretty much like it was when I got married. Though when I do it, I’ll scrunch it curlier than in the photo I took at the salon. 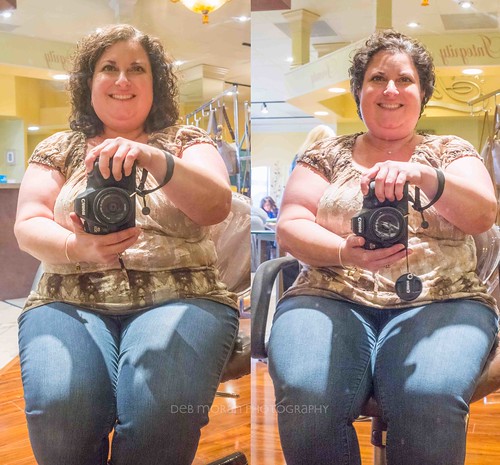 Thursday, I got my portacath “installed.” Before the procedure, the doc came in to explain it all. He did inform me that he was going to use a larger port than he might normally have used because I’m “a big girl,” and in someone like me, the port can actually flip when gravity acts on it (once I am upright after having it put in lying down). I was trying not to be offended, because medical realities are what they are. But, then I realized he was just referring to “the girls.” With that in mind, besides flipping, when the breast pulls down on everything once I’m upright, it could also pull the catheter out of place. Spectacular. But, even though it’ll move, it should still be in there enough to use. We will find out for sure on Monday.

Anyway, I think the prep for the whole thing took longer than the procedure itself. Especially since they had to clean my skin twice. Why twice? Well, after I was cleaned with a lovely blueish alcohol (I was promised it’ll wash off), they realized that they needed to tape my boob out of the way. Yes. You read that right. And yes, I was laughing at that. On the plus side, when they taped it, they were able to somewhat mimic gravity, making for better placement of the port.

I was very worried about being aware during the procedure, since I was only getting twilight anesthesia. But,Â the lovely Dr. Warner kept the nurse pushing the versed, and I was blissfully unaware (except for when Dr. Warner administered the lidocaine – man, does that stuff burn at first!). Once I was numb, he made two incisions. The top incision is to access the vein for threading the catheter through, and the bottom is to create a pocket deep under the skin for the port itself. The port is sutured into place, connected to the catheter, and then both incisions are closed with dissolving stiches underneath the skin. The skin is closed with medical superglue. I’m like an arts and crafts project. 🙂 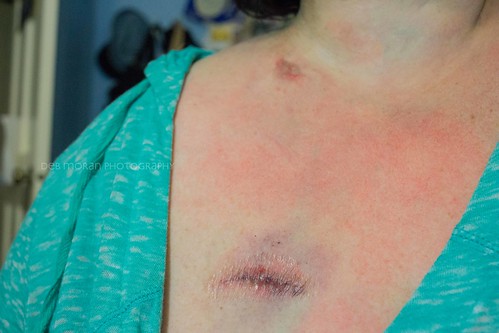 Here’s the website showing the actual port that’s inside me. http://www.medcompnet.com/products/ports/profuse_ct_ports.html. Size-wise, I think it was about an inch in diameter at the base. And not that it matters, but I love the light purple color. It reminds me of the sterling roses at my wedding. 🙂

Original Comments from the CaringBridge Blog:

Maybe you could see if your insurance will give the “girls a lift” after this is all over?
â€”Lenna Scott, April 15, 2015

One step closer to wellness! Not sure if “the girls” are Fink or Kirshenbaum. This Fink sure didn’t get them;) Your new do is beautiful and your head will be just as beautiful bare.
â€”Susan Rosenthal, April 10, 2015

The Hair is soooo cute!! Shows that face I always loved–and–You always were an arts and craft project–The “best” all glued together–Our neighbor just had a port done–He’s a Big Boy, and doing well—We are all cheering you on!!
â€”jo Wilken, April 10, 2015

Bless your heart! We don’t know each other personally but I share a journey of Capture Your 365 photo challenge with you and I remembered I had an account from friends that had gone through this journey. So I will come along side and cheer your good moments and support the challenging ones. Amazing what a camera can do to join the masses 🙂
â€”Jeanne Thomas, April 10, 2015

I always wondered about the cath procedure. I wish they had a way to leave it outside the skin so that you didn’t have to be “stabbed” at all. The cut looks great! You are really the bomb diggity my friend. Tell Mere she can draw on your head when you lose your hair. Tattoos 🙂
â€”Laura Roberts, April 10, 2015

Forgot to mention that I love your coif! I think you look soooo young!
â€”margo barbakow, April 10, 2015

Thank you for posting pictures. We need to see it because it’s only a tiny fraction of what you’re experiencing. I’m proud of you and inspired by you, my friend. Lots of love to you. xo
â€”Holly Ruck, April 10, 2015

Go Deb! I love the hair and I’m glad the installing of the port went well! The schenks will be thinking of you next week ? Stay strong!!!
â€”Vanessa Schenk, April 10, 2015Â